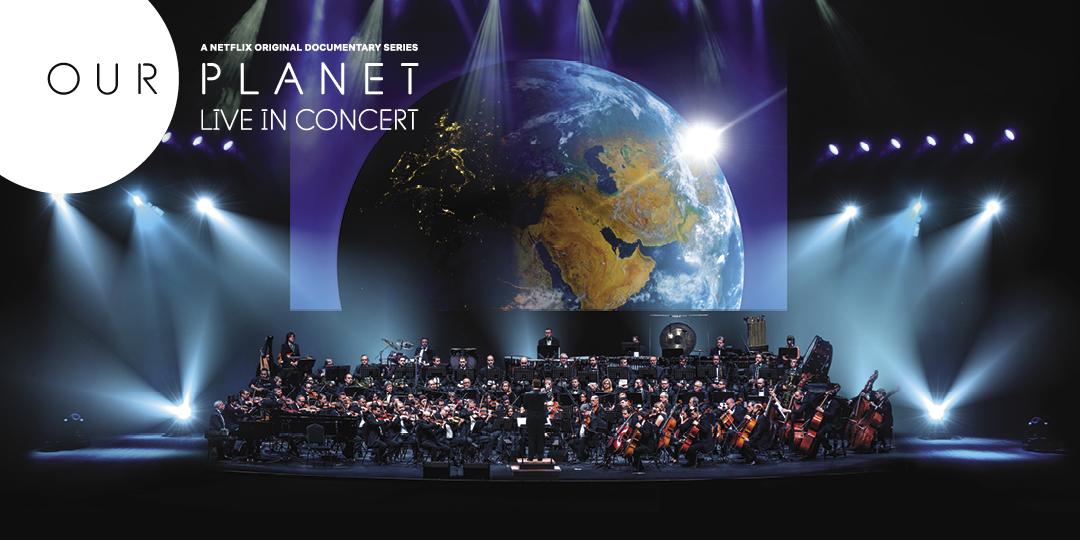 Our Planet Live in Concert

Get your tickets now!

On 8 October 2022, the event Our Planet Live in Concert will take place for the first time at the "Centre National Sportif et Culturel d'Coque" in Luxembourg. The well-known Netflix documentary will be reinterpreted as a live experience and highlights from the series will be combined with an orchestra ensemble. Both fans of sophisticated music and families with children will enjoy this event!

Specially developed by the series producers WWF, Silverback Films and Oscar®-winning composer Steven Price, Our Planet Live in Concert is narrated on screen by legendary broadcaster, David Attenborough. The outstanding natural world visuals of Our Planet, combined with a high-quality live production, will result in a spectacular live experience.

The landmark eight-part Our Planet documentary series will be reimagined as a two-hour arena show with beautiful visual and sound effects, accompanied by a 44-piece orchestra. A giant screen will present the incredible cinematography of Our Planet, allowing audiences to be fully immersed into the wonders of earth’s wildlife and their habitats. Dazzling, intelligent lighting will heighten the visual experience beyond the screen and around the venue programmed to run in sync with the footage.

Our Planet took the world by storm when it was released in April 2019. Taking viewers on a spectacular journey of discovery, showcasing the beauty and increased fragility of our natural world, the series explores the fact that humans have become the greatest threat to the survival of our planet, and all the species that inhabit it. The series also highlights that there is still time to address the challenges, if we act now.

Concert producer Floris Douwes at GEAlive commented, “Our Planet Live in Concert truly is an event! The creators of Our Planet have edited the most breath-taking sequences from the series to deliver a unique and compelling narrative to live audiences on a large screen in full HD quality. We are thrilled and honoured that the Oscar®-winning composer of the series, Steven Price, will be hosting and performing live at the shows.”

Alastair Fothergill of Silverback Films is a pioneer in creating concerts around landmark wildlife series with his previous projects Blue Planet, Planet Earth and Frozen Planet. With the wealth of his experience he says, “Our Planet will be one of the most ambitious concert performances we have ever created, combining the advanced sound and visual technology with Steven Price’s wonderful score and the powerful images from the series. We are very excited by the ambition of the Our Planet concerts to take the quality of the audience experience to a new level.”

Composer Steven Price’s Emmy-nominated score has been reworked for an epic two-hour performance, which will be performed by a symphony orchestra and conducted by Robert Ames. The Academy Award®-winning composer said “I can’t wait to bring the music of Our Planet to live audiences for the very first time. Using a combination of the most memorable sequences from the Netflix series exclusively designed for this show, our incredible musicians and I plan to take you on a journey that celebrates the wonders of our planet - the one home we all share - whilst showing the urgent need to treasure and protect it. It’s going to be an emotional and immersive experience and I hope to see you there.”